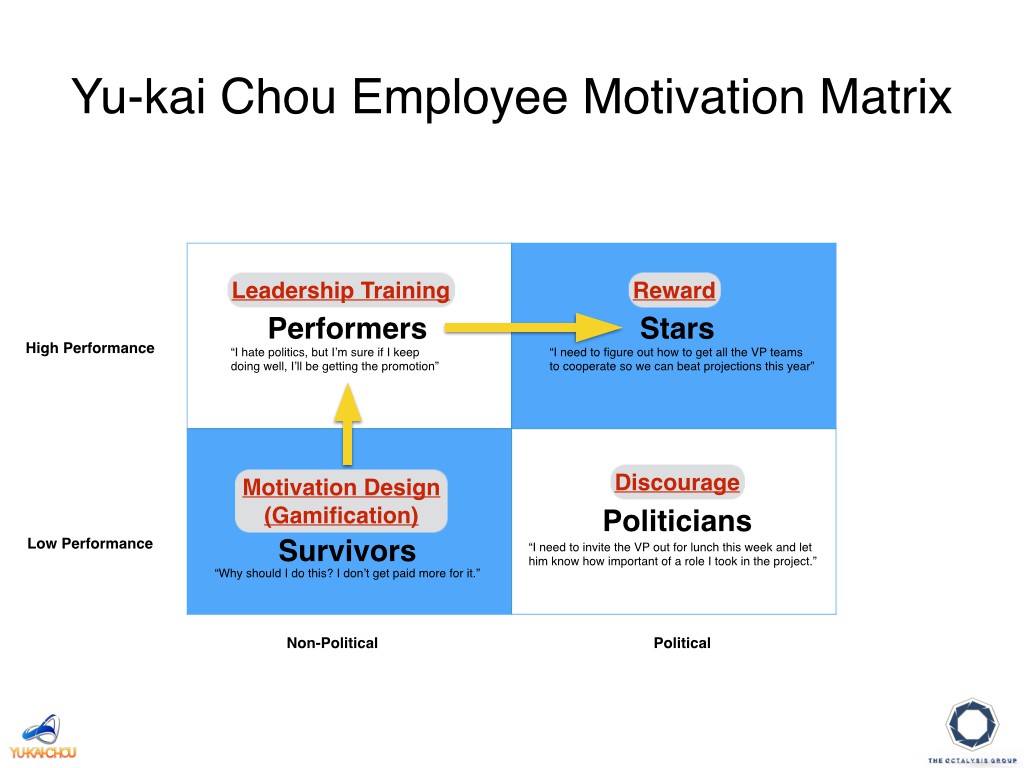 This post is a little different to what I usually write. It is not about my Octalysis Framework (but there are some core foundational principles derived from it), but rather on my observations after working with a significant amount of corporate companies.

Most employees dislike the politics and culture within their corporate environment for a multitude of reasons.

Your coworkers and allies are also your competitors.
You don’t know who is actually playing nice or pretending to play nice.
Sucking up seems to be more important than doing good work.
When working between departments, people would spend an hour explaining why they shouldn’t do something that would take 15 minutes.
People fight to claim credit and put the blame on others.
This has demoralized the motivation of many employees, which results in low productivity, bad-mouthing the company after work, and high turnover rate.

Of course, being a manager is extremely difficult too. You have to deal with this most fuzzy thing called human emotions. It’s confusing and irrational. Many of the smartest people in the world with ridiculous IQs were terrible at figuring out human feelings.

I remember many years ago, when my friends first entered the workforce, they would complain how their bosses are incompetent idiots that didn’t understand the business at all. However, I’m almost 100% certain that, besides a few exceptions, now that these friends are managers themselves, people under them are calling them incompetent idiots.

Clearly, it is very difficult being a good manager.

Based on my observations, I’ve created a quick player type matrix for the corporate environment so managers would have a strategy guide to follow. Keep in mind, this is not meant to be some great gamified player type theory that I spent years perfecting. There are many others like Richard Bartle and Andrzej Marczewski who have more robust gamified player type concepts that I highly recommend. 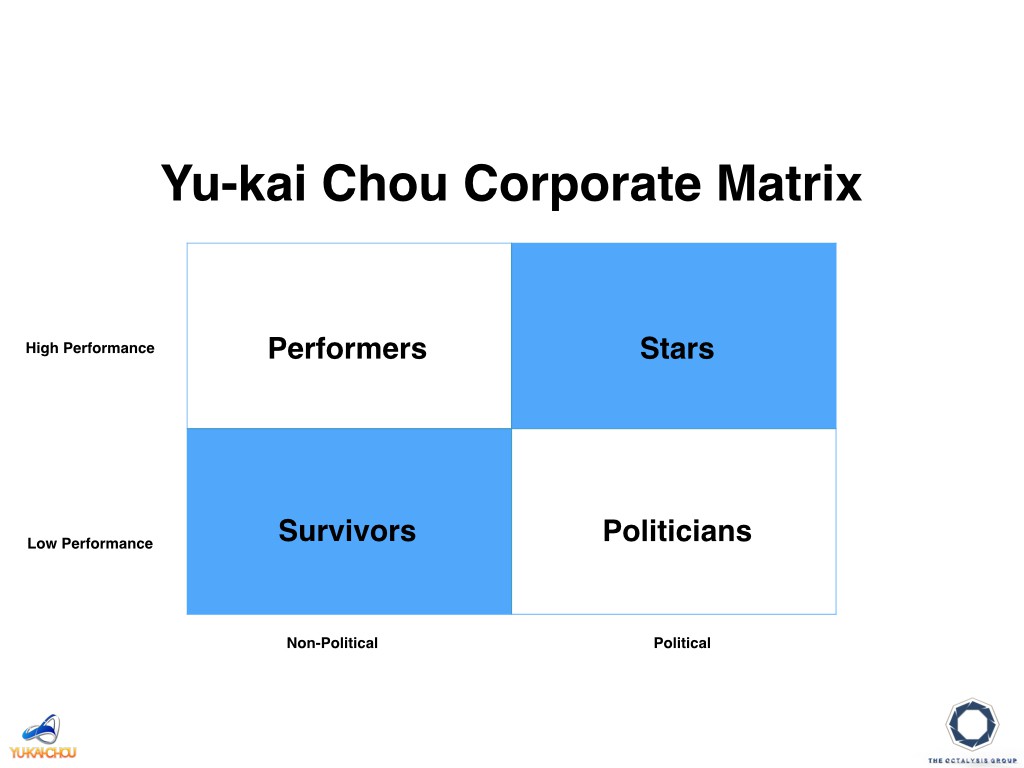 The key principle in my Corporate Player Types, is that I divide all employees into two characteristics: performance, and politics.

Performance simply means how well the employee can carry out their responsibilities. This factors in work ethics but is focused on end deliverables. If an employee works hard but cannot produce good work, then performance is low. However, this should NOT factor “business impact,” simply because business impact is a result of having both performance and political skills.

Politics means how good (or proactive) the employee is at making friends within the organization. These are people who regularly say nice things to others, ask coworkers out for lunch, and proactively try to impress their superiors. They also tend to make something harsh sound more pleasant to the ear, even if it means sugarcoating the information a little bit, or having slight exaggeration or omission. They aren’t “liars” in most socially acceptable standards, but they are very driven by extrinsic goals and therefore pick what they say carefully and strategically. 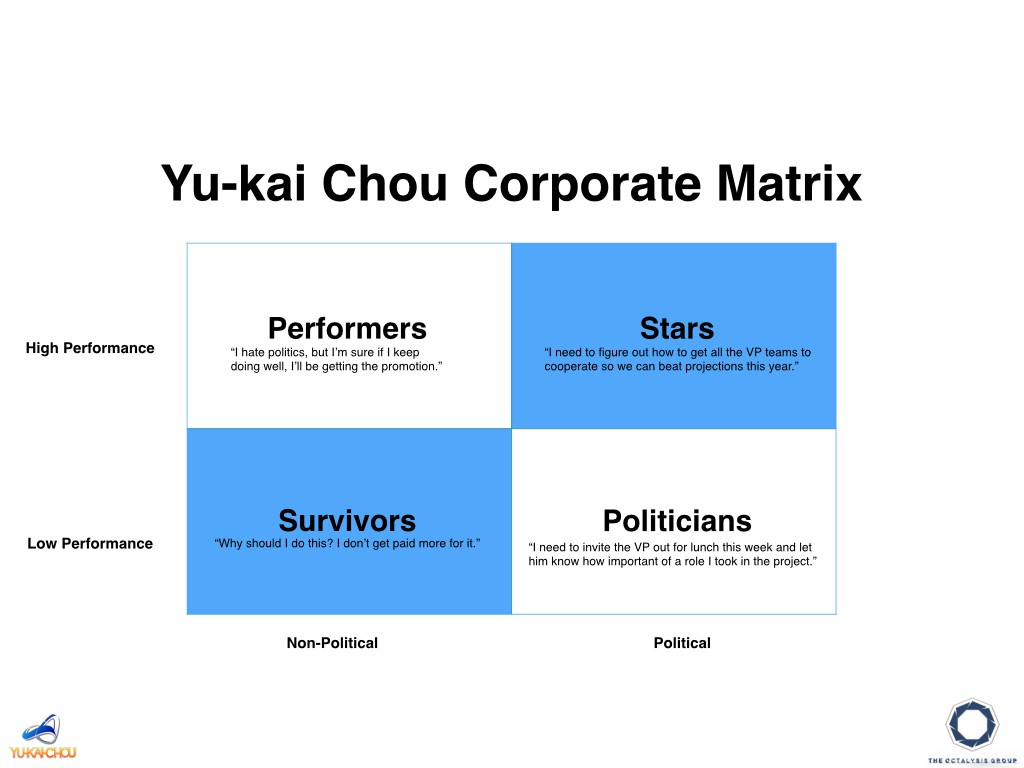 Survivors are not necessarily dumber or less efficient at what they do. More often than they are just not motivated or incentivized to do good work. Survivors often like to say things like, “Why should I do this? I won’t get paid more to do it.”1 or “Last year I did way more work but I didn’t get a bonus. There’s no point.”

For the High Performance but Low Politics quadrant, I call them “Performers.” Performers are people who do great work and finish their deliverables in efficient and reliable manners. They are often the people that solve problems that no one else on the team can solve. However, they have a natural dislike (or ignorance) towards corporate politics, and therefore never spend the time to make friends or work on other peoples’ feelings and motivations.

Performers also don’t suck up to their bosses and would do career suicide moves like telling their VP, “I can’t go to your dinner party because I need to think about how to execute on the plan next week.” Performers usually dislikes those who are good at politics, thinking them as “phony” and “insincere.” They inherently believe that, “As long as I do a good job, I will be given my fair reward. That will show those fancy-mouth ass-kissers.”

For the Low Performance but High Politics quadrant, I call them “Politicians.” Politicians are people who don’t necessarily do great work (not terrible enough to get fired though), but they are good at mingling and making everyone like them. They would regularly invite coworkers and VPs to lunch, share secret gossip as if they were everyone’s best friend, and have a knack for claiming credit and recognition.

Politicians love having meetings to show how important they are, and often are very outspoken, especially with higher-level managers in them. When it comes to delivering the agreed work from the meetings, they often defer that to the Performers, and then report all the great things about it in the next week meeting, which makes it seem like they are doing good work again.

Politicians are not necessarily amoral, and organizations need them as people lubricants. They are simply keen on taking the most frictionless path to improving their careers. Politicians often contemplate “I need to invite the VP out for lunch this week and let him know how important of a role I took in the project.”

Finally, for the High Performance and High Politics quadrant, I call them “Stars.” Stars are usually the individuals who rise to the top of an organization. They are great at delivering great work, but are also great at factoring in everyone’s feelings to make things happen.

Stars strive not only to perform on an individual level, but they try to get the entire group to perform too. They see work as their game, and they often work night and weekends to achieve the highest score they can possibly get. Stars often think of challenges like, “how do I get all the VP teams to cooperate so we can beat projections this year.” 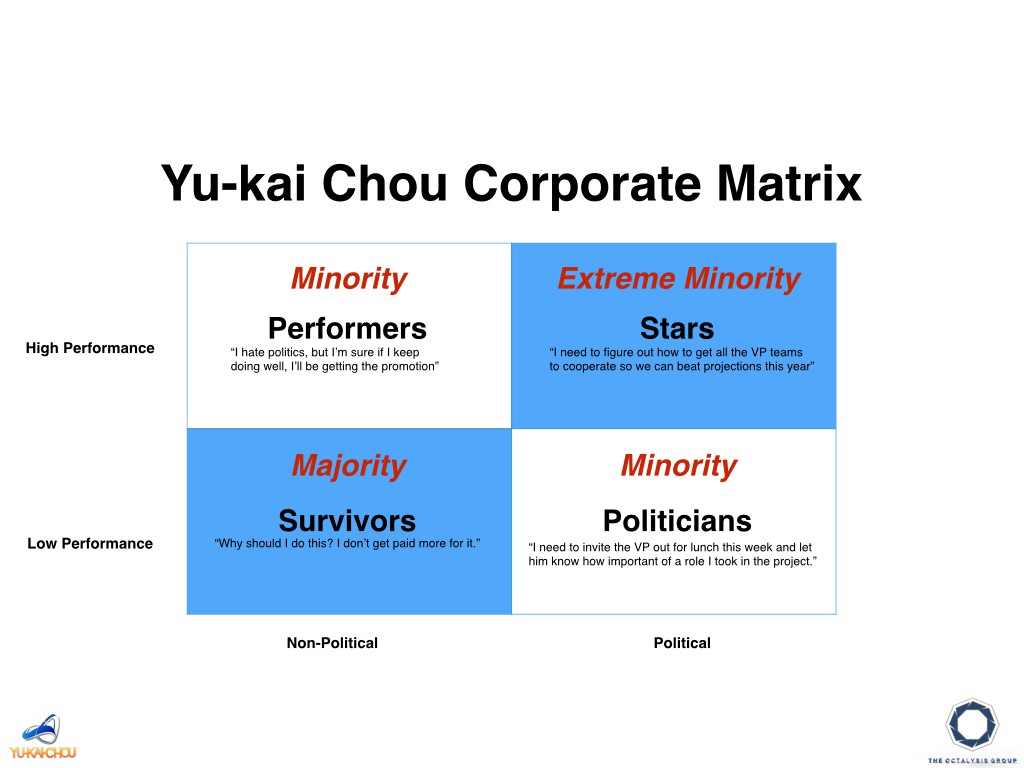 Above is the groundwork of the Corporate Matrix. With that laid out, there are a few things to note within these four groups.

First of all, in almost all organizations I have seen, the Survivors are the vast majority. Most people are not passionate about their companies, their work, or their bosses, but see these as a necessity to make a living. In comparison, the Performers and Politicians are the minorities within an organization, but they are usually the people that are making things happen. Finally, Stars are the extreme minority, and often there are only a handful of them within an organization.

More often than not, Performers look down upon Politicians, and believe that only hard work and great output should be rewarded. On the other hand, Politicians often like to make friends with Performers because they are “useful” for getting the deliverables out. “Even though the guy is arrogant and hard to work with, we put up with him because he can do amazing work.” They are also good at giving encouraging words to the Performers, “Hey Jennifer, it’s time to do the brilliant magic you do again. I don’t know how our group survives without you!”

Stars also like to work with Performers because of their strong and reliable deliverables, but they also utilize the skills of Politicians to push their agenda forward in meetings.

One of the most important things to observe through this Corporate Matrix, is that how you reward the Politicians completely determine the company culture. If Politicians are rewarded more within the organization, the Survivors then strive to become politicians themselves. Some will become successful, while some will not, but since the Survivors are the vast majority of a company’s workforce, now the majority is thinking about how to network with others and claiming credit over delivering good work.

What’s worse, is if the organization rewards the Politicians the most (which is often the case for those that know how to make superiors emotionally happy), Performers will drop down and become Survivors. This is because most Performers I have seen still have a distaste for playing politics, but now they no longer see the point of working hard. As a result, they stop exerting themselves and simply work hard enough to get a paycheck.

So as you can see, when an organization rewards those who are good at political skills, not only will they have more Politicians, but they will have less Performers, which massively increases bureaucracy and decreases the firm’s market competitiveness. 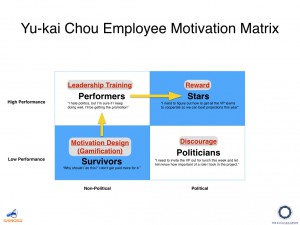 With the key observations above, there are a few recommended dominant strategies to take if you find yourself in such an organization.

Motivate your Survivors to become Performers. Again, Survivors aren’t stupid, just not motivated to work hard. With this group, it is important to motivate them through good Human-Focused Design (8 Core Drives of Octalysis and Gamification) so they work harder and deliver great results. Give them more Core Drive 1: Epic Meaning & Calling, stronger senses of Core Drive 2: Development & Accomplishment, as well as Core Drive 3: Empowerment of Creativity & Feedback. If not, they are probably using their creativity in being amazing within the games they are playing outside of work anyway.
Discourage your Politicians. Politicians are fine, but they should not be the cultural focus for the organization. It’s good to say nice things, have lunch with coworkers, and develop better relationships with your superiors, but that should be done for Intrinsic Motivational Purposes (Core Drive 5: Social Influence & Relatedness is a Right Brain, hence Intrinsic, Core Drive). If employees do it for Extrinsic Motivation (Core Drive 4: Ownership & Possession, which is a Left Brain, hence Extrinsic, Core Drive), then it is no longer genuine nor productive for the organization.
Reward and Train the Performers. The Performers are doing great work for the organization, so they should be rewarded for it. However, their limitations lie in the fact that they are less good at leading and motivating others. Because of that, they should be given more leadership and interpersonal training (consider reading my Gamification book on Octaylsis ? ) so that they can eventually becomes Stars of the organization.
Reward and Empower the Stars. Most organizations are pretty good at doing this, mostly due to the credit of the Stars themselves, but it is important to heavily reward the Stars so they are retained and not snatched off by other companies. In addition, they should be empowered with more freedom and autonomy to move the company to greater heights.
Can you relate to this Corporate Matrix in your work place?

One of the reasons why my Octalysis Framework is so popular is because people can relate the knowledge to their own lives and the choices they have made. My hope is that people will feel the same way for the Corporate Matrix if they work at a large company.

Do you see the same tendencies in your workplace? Or do you see completely opposite trends? Do you agree with the suggested strategy, or have even better ways to deal with the workforce? I look forward to learning from you in the comments below.